Your browser does not support JavaScript!

Panic Attack
6:00
The Dance of Eternity

Thank you Sarah and FM96!! I loved it and had a great time doing this interview!! 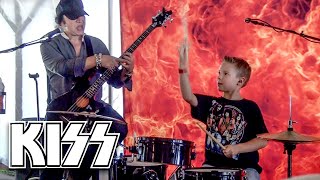 I really want to thank Eric, Gene, Paul & Tommy!
They are so super nice and Gene gave me a donut with sprinkles, my favorite!!!
This was the absolute BEST Day of my life!!!!!!!

Thank you everyone at KDKA TV.

Interview on KDKA TV Pittsburgh Today Show with Dave Wells (drummer of Hungry Hearts) and Roy Martin-Smith of the Hard Rock Cafe for the May 30 show to benifit the Pittsburgh Food Bank.

Thank you everyone at Sunrise 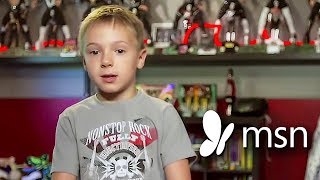 Thank you so much to MSN, Cilista Eberle "Producer", Jim Felber "Director", Joe Louis Walker "Musician" and Blackwater Video.
What a Great day this was for all of us!

Hot For Teacher, LIVE in Concert with Brad Paisley 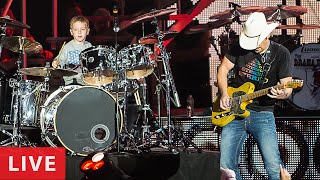 Hot For Teacher, LIVE in Concert with Brad Paisley

First Niagara Pavilion, Burgettstown, PA.
Over 18,000 people attended. Song starts at 1:00 in.
THANK YOU so much to Brad and the whole crew! Everyone was extremely kind and treated Avery like a Rock Star and the experience of a lifetime! 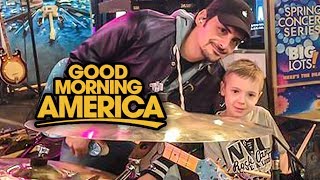 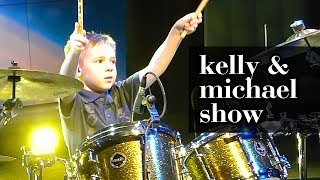 "INTERNETS YOUNGEST AND MOST FAMOUS DRUMMER"

0:34 ... the director decided to organize a festival were children can show their skills and talents; what took them and his parents by surprise was that the shy kid with tender eyes became the internets' youngest, as well as most famous, drummer.

1:06 ... Born Sept 11, 206 in small town in Pittsburg, PA, Avery Molek grew up in music-loving family. At 2 y/o Santa Claus got him a guitar and a drum set that he learned to play by himself. His parents said that Avery liked to watch music videos rather than cartoons; but what started as a kid games became a serious and compromise hobby. To start he ask his mom to get him records from his favorite rock groups, then he painted his face like "Kiss" members and finally memorize dozen of classic rock songs like Van Halen, Guns and Roses and Def Leppard, among many others. All this was taped by his parent and upload to "Youtube" so his uncles, cousins and grandparents could enjoy his extraordinary talents. At 5 y/o Avery received an invitation from a company to play a small concert for his employes; when they found out that he had a video channel in "Youtube" his fame grew as froth.

2:35 ... Currently, Avery Molek is 6 y/o, his Youtube channel is being seeing more than7 millions times and 26,000 subscription. In his later videos Avery appears with "French Kiss" a group that invited him to play across USA. How about that ? But even thought his been watch by music producers, his only desire is have fun and play drums to his favorites fans: his parents! 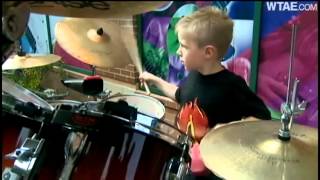 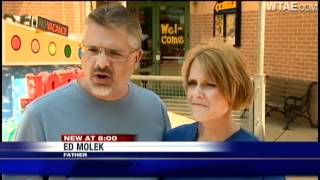 The local newspaper saw me drumming and decided to do this short video.

Thanks to The Observer-Reporter and Harry Funk!