Your browser does not support JavaScript!
Popular Live Recent News

"Heard It On the Radio"

"Heard It On the Radio" is a song from the show "Austin & Ally".
I go a little drum crazy after the song! Please enjoy!

"Heard It On the Radio"

My fourth radio interview.
Interview was for my viral video "Hot For Teacher".

My first ever radio interview.
Interview was for his viral video "Hot For Teacher".

My first ever radio interview. ...

"Rock And Roll All Nite"

Playing with Code Whiskey at the Pittsburgh Hard Rock Cafe. Memorial/fundraiser for Karissa Kunco, who lost her life in 2012 due to Domestic Violence. "KARISSA'S ARMY" created this memorial and has been formed to not only help keep the memory of Karissa Kunco alive, but to get Justice not only on the perpetrator of her murder, but to also help empower others to step out from behind the shadows of abusive relationships while they have the chance.
We're greatly honored to have been a part of this memorial and to see Karissas' life still touching and helping people. Thank You Kunco Family & KARISSA'S ARMY!

"Rock And Roll All Nite" 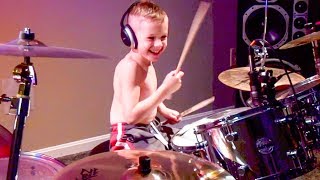